Albert here with a new update.

Long story short, MAKERphone’s development took us more time than we thought it would and we won’t be able to deliver all 2G phones in March as we estimated when the campaign started.

All phones will be shipped in May (both 2G and 4G models).

Why did this happen?

Well, estimating the development time of a project of this scale is a bit tricky.

During the development of the phone, we’ve figured out that there are just so many things we can do to make the initial idea even better.

Our main goal is to develop and deliver a product that will truly live up to your expectations and we decided that we won’t cut the development of those extra features for the sake of earlier delivery.

What are these extra features that you’re talking about?

Read along, I’ve compiled a detailed report of what we’ve been working on the past few months.

We are confident about delivering an amazing product to our amazing backers (you) and we think that delivering an unfinished product on time is much worse than delivering a really amazing one two months later than initially estimated.

Will you run away with our money and not give us our phones?

I know what people think when they read an update like this, but we’re not scammers.

We had a Kickstarter campaign before (https://www.kickstarter.com/projects/albertgajsak/makerbuino-a-diy-game-console) and we’ve delivered all of our rewards.

Moreover, we want to build a real business, create amazing products and deliver what we promise to our amazing customers (again you).

I’ve “lost” my money several times when I personally supported campaigns on and off Kickstarter that were successfully funded and then disappeared without delivering their rewards and the feeling is definitely not pleasant.

Well... you’re not getting that from us… in fact, the only thing that you’re going to get is a really amazing phone with an amazing set of features and an amazing set of tutorials created by the amazing team of ours :)

Did you start manufacturing the phones?

Not yet, we plan to start with the manufacturing process by the end of this month.

Did you order the components yet?

We are still finalizing the hardware design so we've sourced most of the components that we're sure are going to be in the final version of the phone.

We've also already ordered a small part of components that we're completely sure are going to be used in the final design and all the material required for the tools packs. The components should be at our warehouse by the end of the month.

We’ve decided to create our own modules with the tiny SMT components presoldered on them, instead of buying them from 3rd party suppliers because of the following reasons: 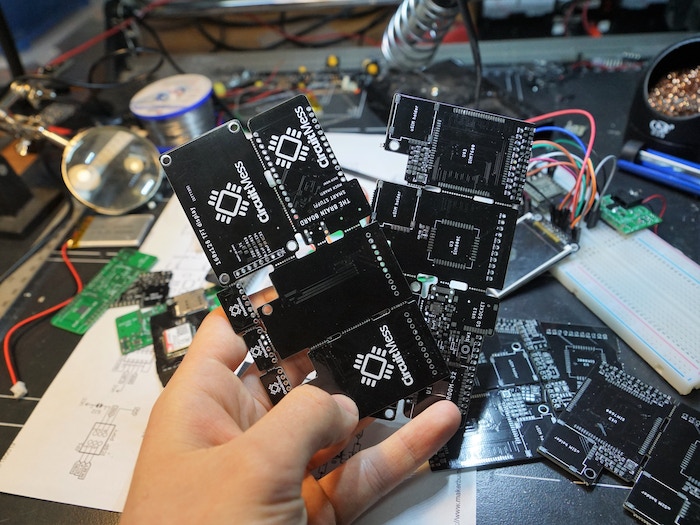 We’ve reimagined the MAKERphone’s sound board and combined the following features all in one circuit board:

The most significant part is that we switched to this amazing little chip that has a DAC and an amplifier integrated in a single BGA package the size of a dust particle:
https://www.nxp.com/docs/en/data-sheet/TFA9882.pdf

The new sound board 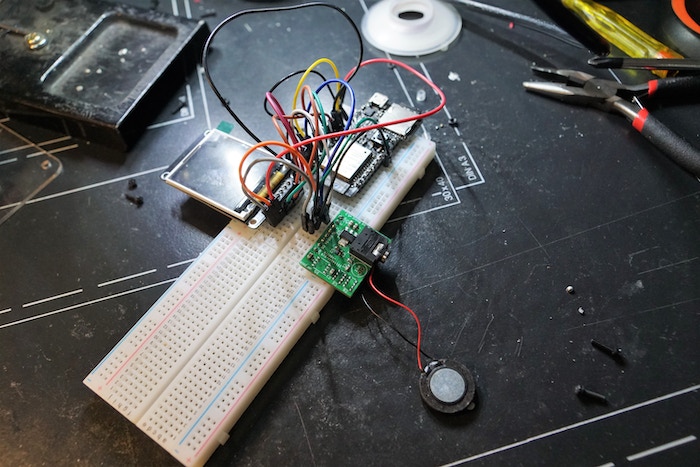 This new library is a part of the main MAKERphone library that you can already check out here:

The library is already 147 commits strong and we’ll keep pushing! :)

Most importantly, the new sound library allows you to:

We’ve engineered our own custom microcomputer module and have added some neat new features: 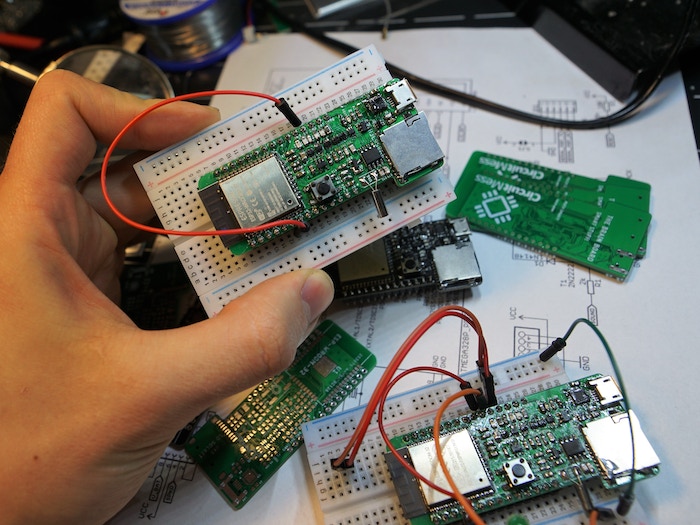 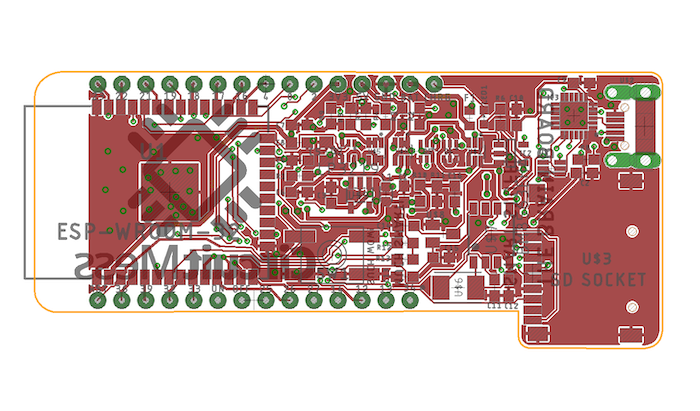 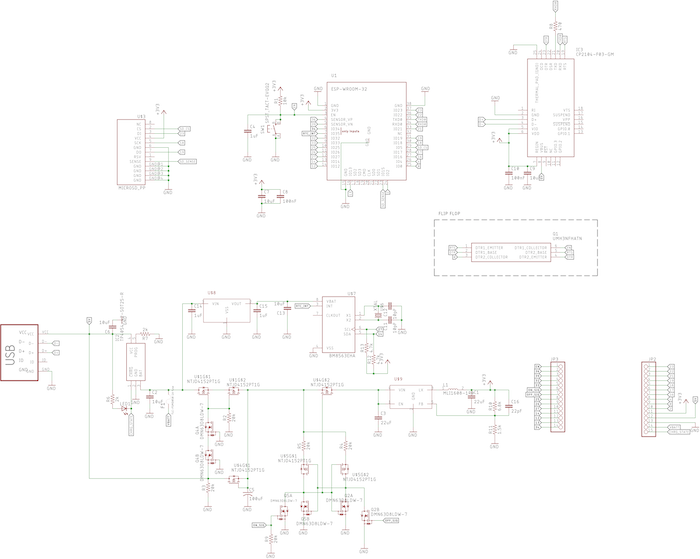 The specs remain the same, but the module is now produced by us.

It also has a new circuit for adjusting the backlight on-board. 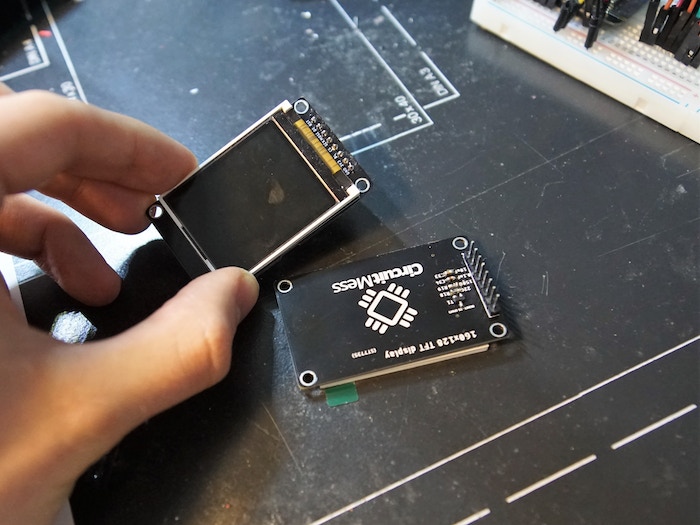 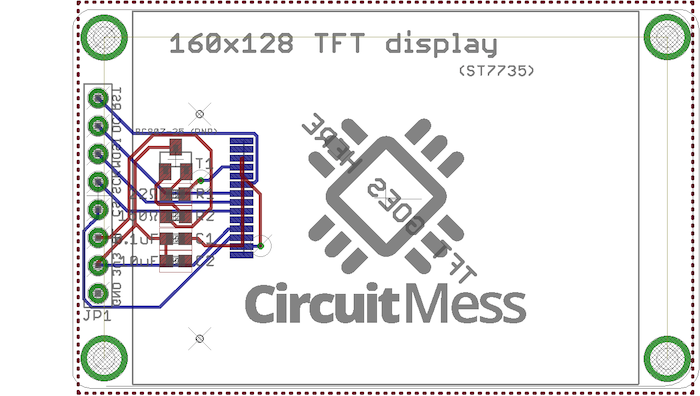 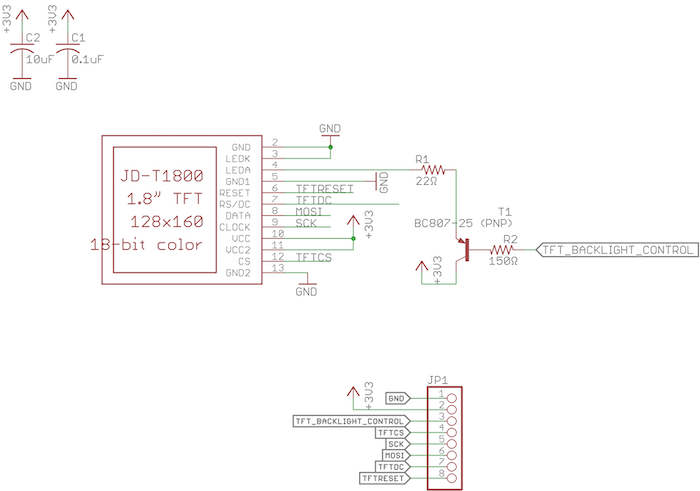 We’ve ditched the old clicky mechanical joystick and decided to go with a real analog joystick.

The model that we’re using is really similar to the one used on the original PlayStation Portable. 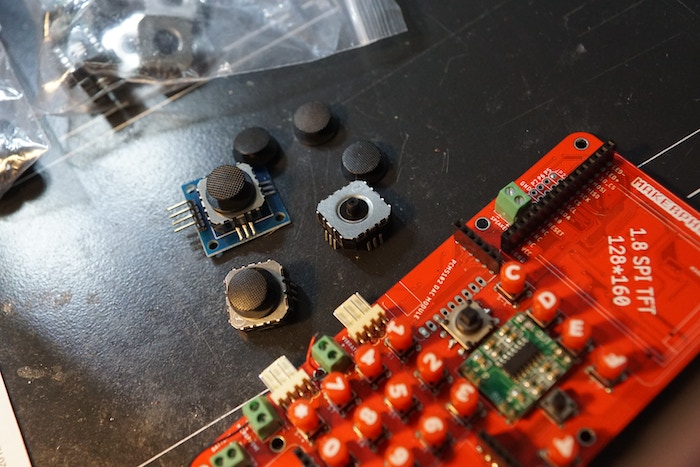 The 2G/4G modules have an interchangeable socket!

Which means that you’ll be able to easily change your mobile communication module and upgrade from 2G to 4G in no-time. 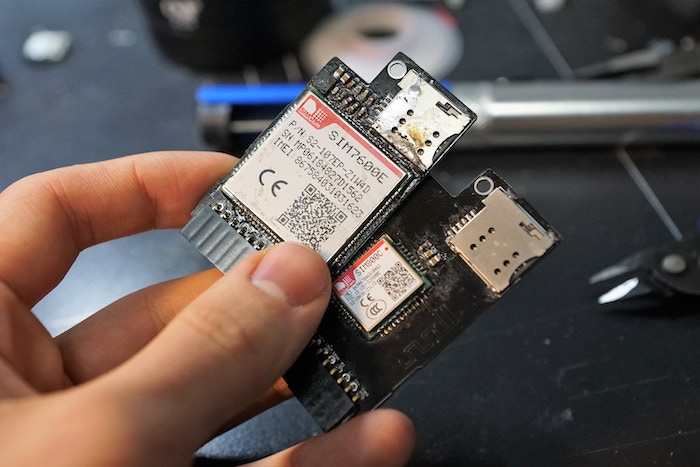 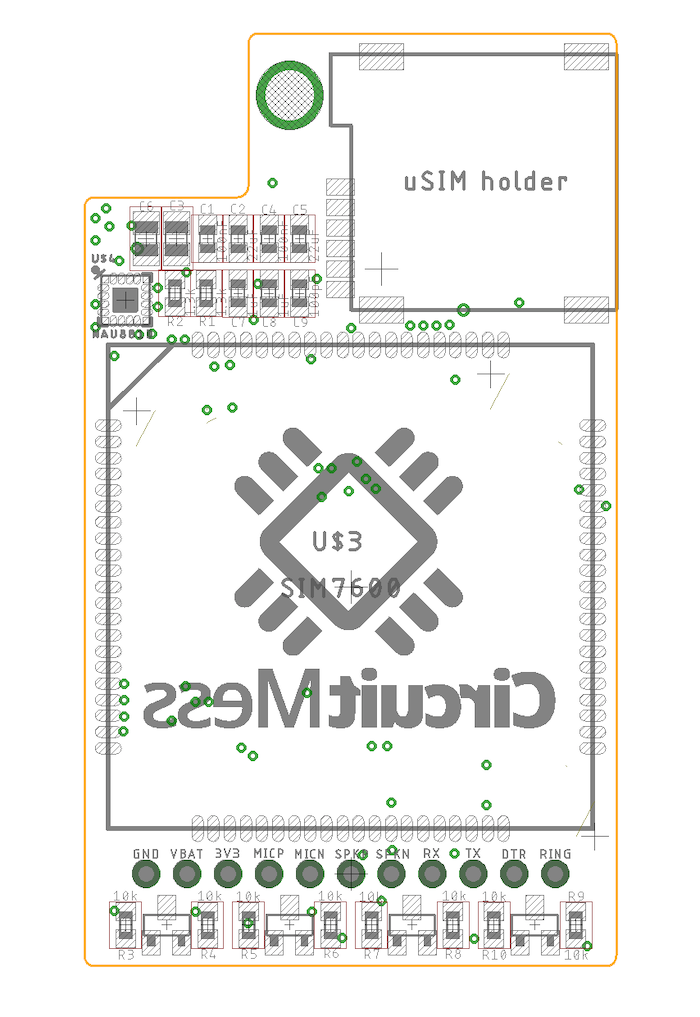 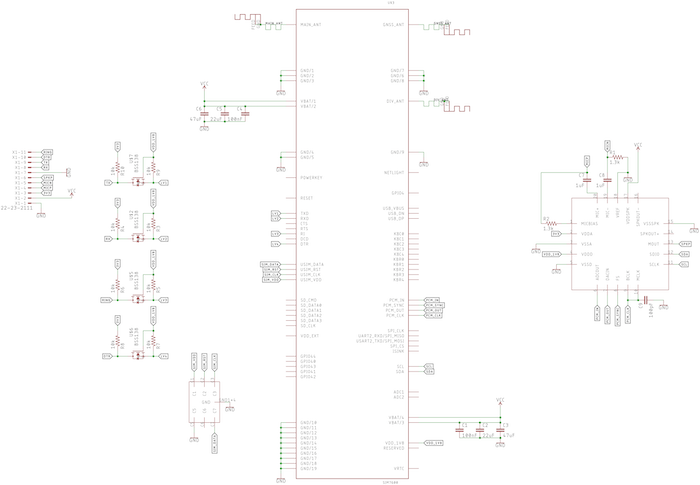 We’ve expanded our repository of default apps that will come preloaded on your MAKERphone!

Flashlight - Use your MAKERphone’s RGB LEDs on the back as a flashlight.

Pong - A well known classic with slightly updated graphics. Can save high-scores!

Space Invaders - A classic game you all know and love, now colorized and with bleepy sound-effects. 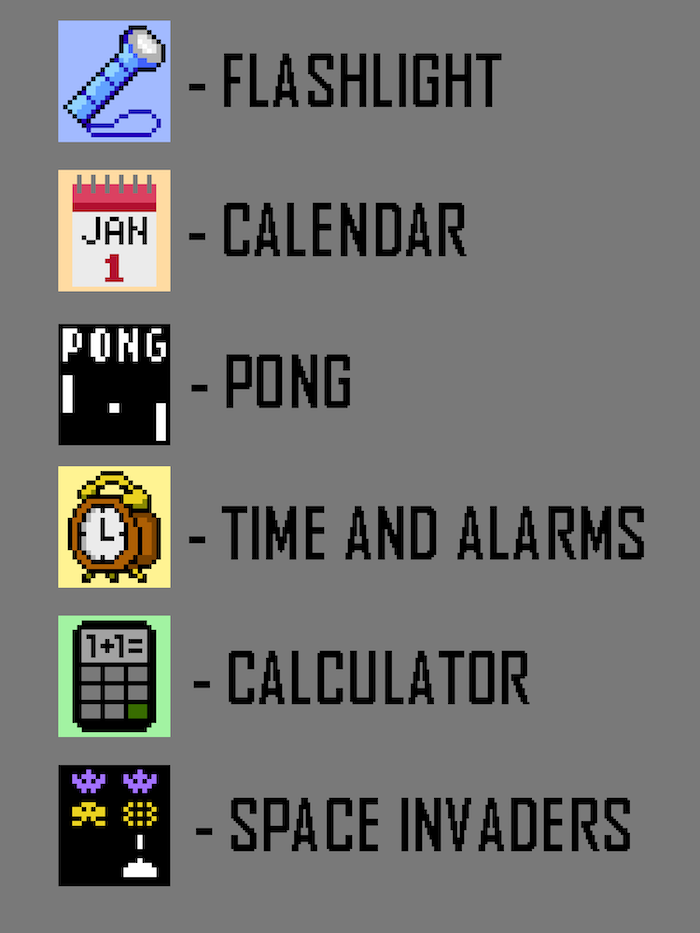 Remember the apps icon that we’ve showed you folks at the initial kickstarter listing?

You were able to select and load apps and games from the sd card in a menu. 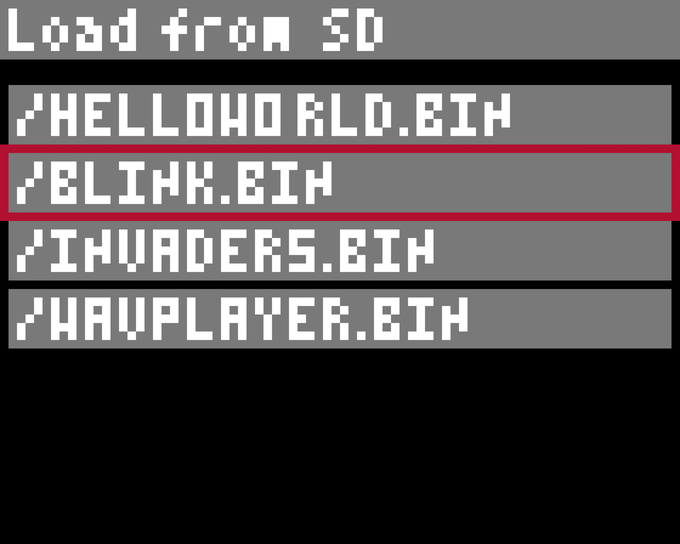 We’ve ditched this menu-like system and now all SD card located apps and games you make will be displayed in the main app menu. 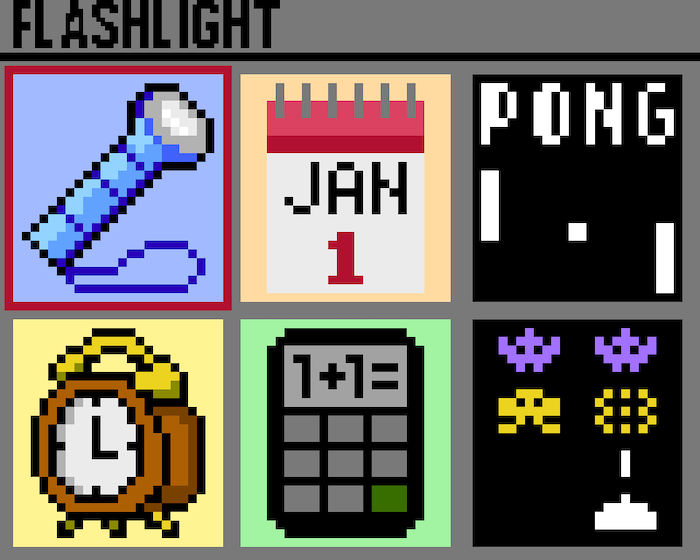 MAKERphone now reads the apps located on the SD card and displays them using the corresponding thumbnails.

This is the what the new SD card structure will look like.

It consists of four main system-used folders and app-specific folders: 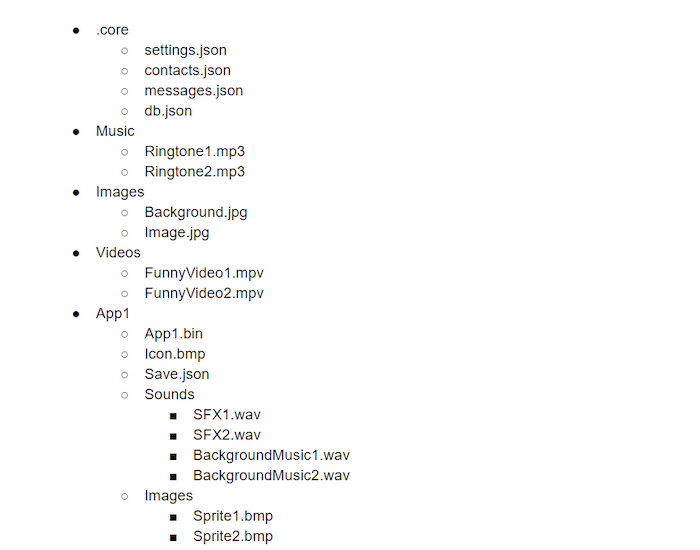 Remember that poll for a unique game of choice that you folks would like us to code?

Turns out the most popular game genres are: 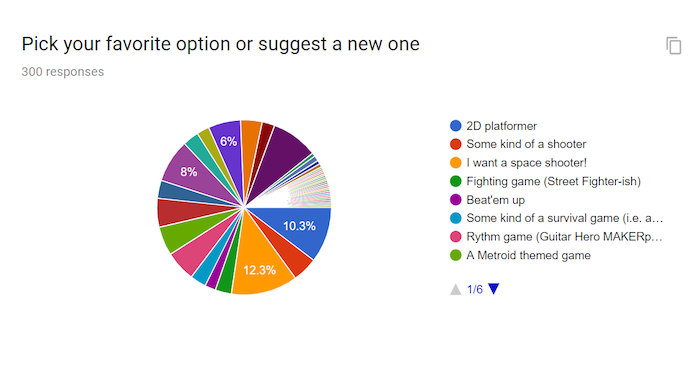 Turns out you really like space shooters, that’s why we started working on one.

We named it “SPACE ROCKS” (creative, I know).

So far, you’re a spaceship that shoots at rocks (fairly similar to the original Asteroids game) but we’ll see where it goes.

If you have ideas or would like to help us with the game design, let us know in the comments below! 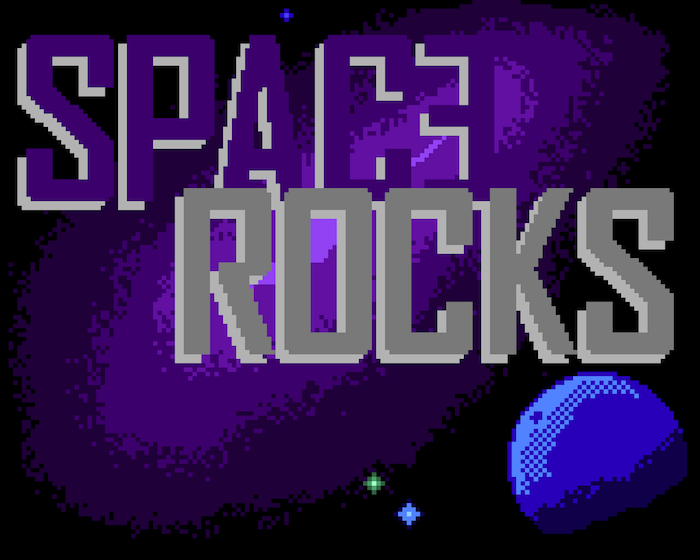 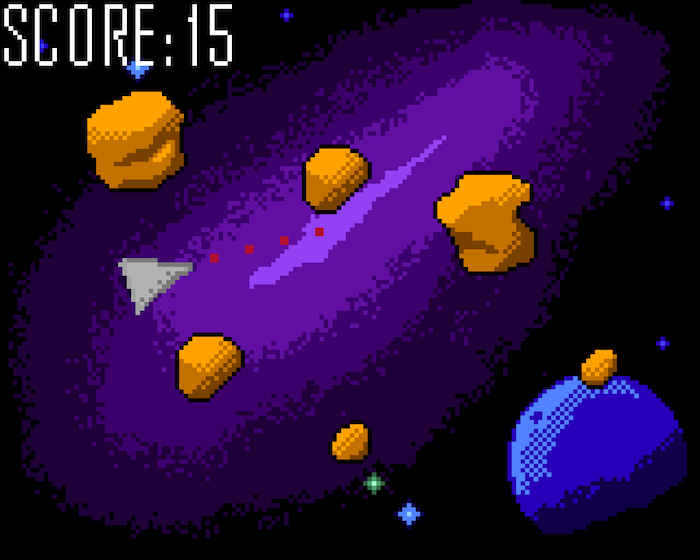 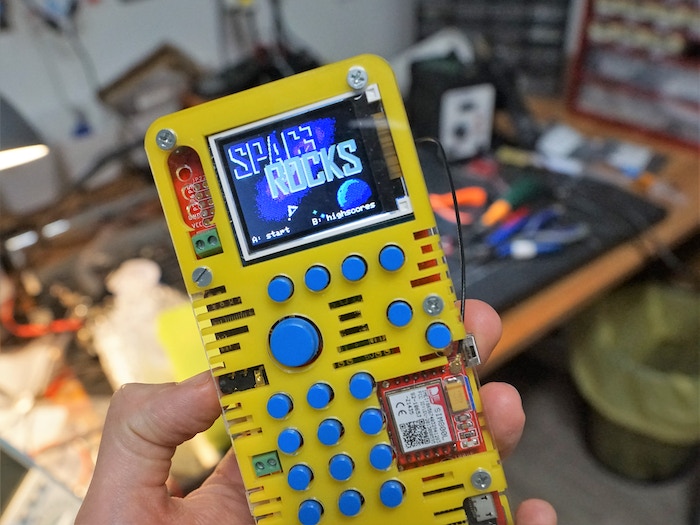 We’re working on revamping our company’s whole visual identity. These are all early prototypes, but something like this will end on your MAKERphones’ boxes.

What do you think? 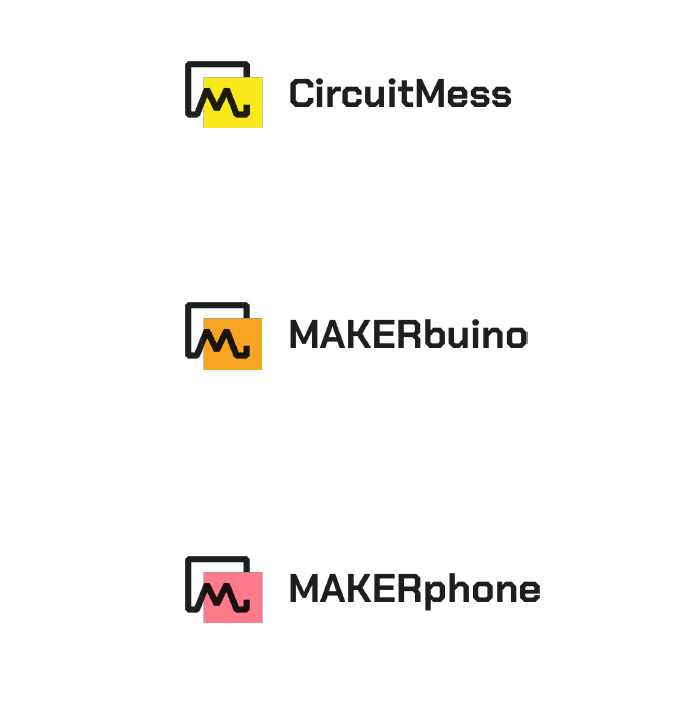 These are all concepts, but you’ll see some of the elements on the final boxes. 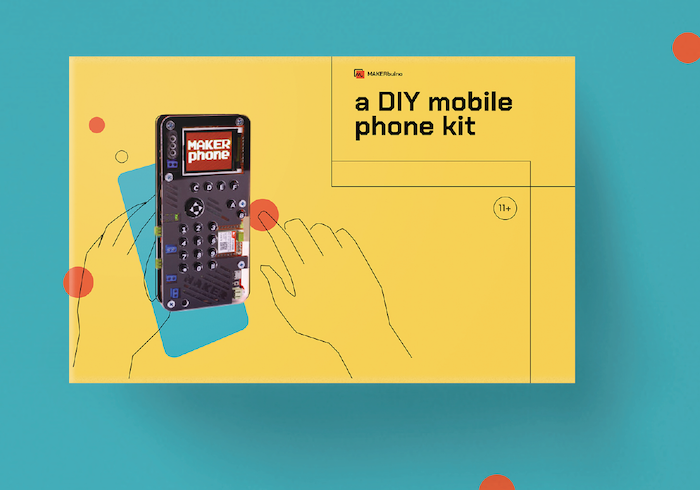 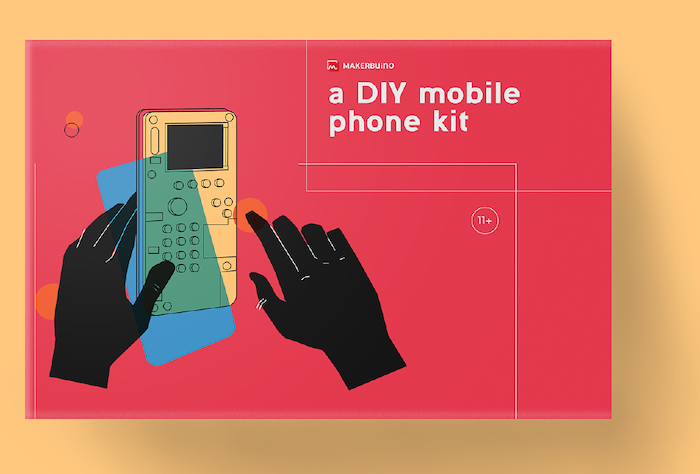 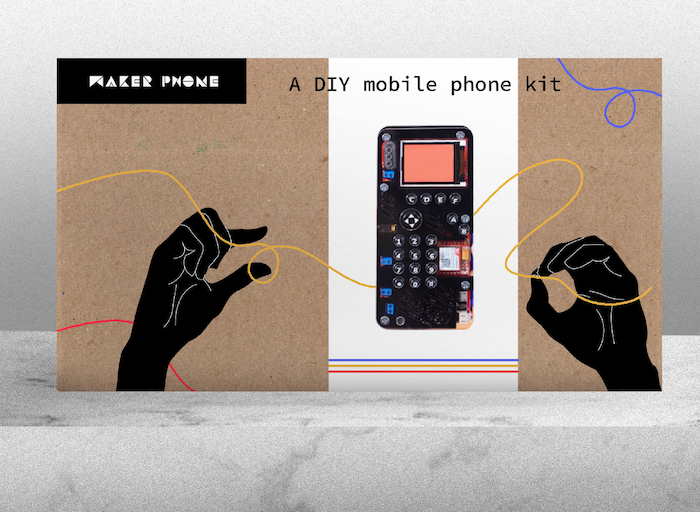 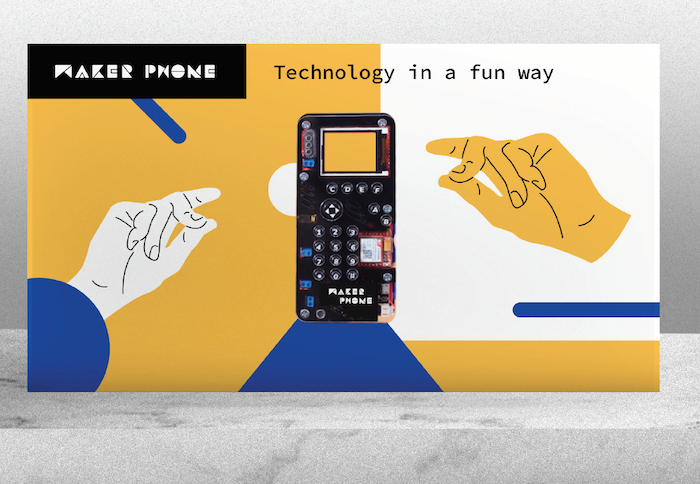 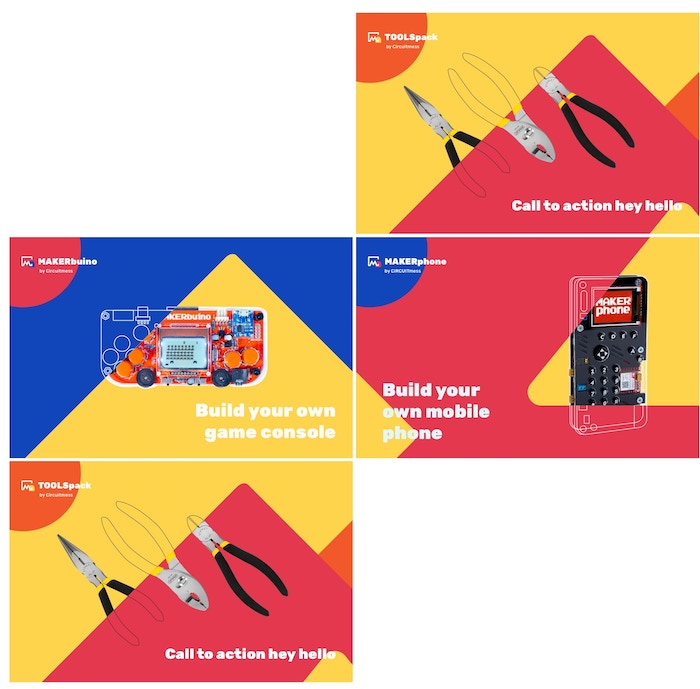 To sum this massive post up - we’ll be a little bit late, but we’re confident about delivering a truly amazing product.

We’re hyped about this more than you can comprehend and we care about delivering something special to our amazing backers.

We’ll update you as often as we can.

Thank you for your patience and if you have any questions, tell me via a private message or write in the comments section.

Love and hugs
- Albert and the rest of the CircuitMess team